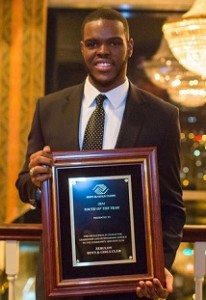 Chris began his career at the Zebulon Club in 2001 when he was only six years old and he has been one of the “regulars” at the Club ever since.  He is a hard worker who cares about “his kids” at the Club. Many of them ask for him by name and ask where he is when he is off at a Youth of the Year or a Zebulon Youth Council meeting. Other High School members respect him and take direction from him while our parents are amazed that he is still in high school.

As a Junior Staff, Chris is a valuable asset.  He not only helps with all age groups in any way asked of him but he also encourages adult staff members to step up their game.  Chris is a hard worker at the Club and on any given day you will see Chris running the Technology Center,  conducting a games room tournament, in the gym overseeing a dodgeball game or even in the Art Room encouraging other teens to attempt something new outside of their comfort zone while exploring new untapped talents.

Much like many young people Chris’ age, he does not have a career path selected that he is seeking with extreme focus, but each of his career choices have one common denominator– to help young people.  Chris is headed to Winston Salem State to pursue a degree in Social Work.  He wants to help families in need to make better choices that will benefit the children in those families most of all.